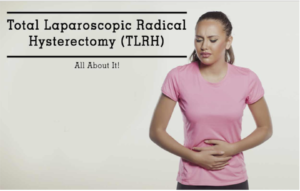 Total Laparoscopic Radical Hysterectomy (TLRH) – All About It!

Cervical cancer is one of the most common types of cancer in females. It is also one of the leading causes of death in women. Women in developed and developing countries, both are burdened alike from cervical cancer. Ineffective diagnosis, lack of awareness, neglect, ignorance, focus on other health issues, and insufficient attention to female health are the leading factors that are causing the graph to get steeper.

Cervical cancer can easily be detected in its early stages so that timely and appropriate treatment is possible. However, due to faulty and ill-equipped healthcare facilities, regular screening tests are not conducted. This leads to a delayed diagnosis and treatment, that aggravates the situation. Radical Hysterectomy is considered as the most important mode of treatment of cervical cancer. However, the clinical stage of cancer and its severity determine the plan of the treatment. It can either be only the surgery or a combination of surgery, chemotherapy and radiation depending upon the situation.

Total Laparoscopic Radical Hysterectomy (TLRH) is a minimally invasive procedure that shows promising results in the early treatment of cervical cancer. It is a safe and effective procedure. The procedure is associated with faster recovery, less loss of blood, faster return of bowel function post operation, fewer abdominal wall infections, better cosmetic result, and reduced febrile morbidity. Thus, it is preferred for Abdominal Hysterectomy. However, it consumes more time during the procedure itself.

Total Laparoscopic Hysterectomy includes detaching the entire uterine cervix from the body through laparoscopy and suturing the vaginal cuff with its surrounding supporting structures. The uterus is then removed through the abdomen or through the vagina.
When is it needed?

Total Laparoscopic Radical Hysterectomy is required when there is an evidence of cervical cancer. It is determined before the procedure by a biopsy done by the gynecologist. This surgery removes the primary source of cancer. It is also determined whether cancer has spread to any other or surrounding tissue.

Hence, a Radical Hysterectomy removes the uterus, cervix, and extra tissue around the cervix. If the cells in this tissue are non-cancerous, it is called ‘clear margins’ which is a good sign regarding the success of the surgery.
Before the Procedure:
A series of tests might be required to plan the surgery. These include blood profile tests, ultrasound, CT scans, MRIs, Echocardiography, Pulmonary Function Tests, etc.

Take Away:
Total Laparoscopic Radical Hysterectomy (TLRH) is the most favored method for the treatment of cervical cancer in women. It is minimally invasive and easier to manage to post the procedure.

You can watch a video of Laparoscopic surgery for cancer uterus done by Dr Atul Mishra at our You Tube Channel :