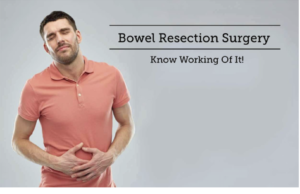 The bowel is a very important part of your body within the digestive system as it plays a vital role in the absorption of nutrients and minerals within your body as well as excreting toxic matter. The bowel contains the small bowel or small intestine as well as the large bowel or the large intestine. However, parts of the bowel may be infected or damaged in such a manner that they may need to be removed in order to save further worsening. Thus, the removal of sections of the bowels is known as bowel resection surgery.

How is bowel resection surgery performed?

In this procedure, sections of either the large intestine or the small intestine are removed which have either become diseased, infected or have malignant growths within them. The doctors and surgeons first identify the sections that need to be removed and then perform the surgery wherein a section of the tissue is excised and then two ends of the bowel are stitched together to form a new section of continuous small intestine or large intestine.

Specific risks for large and small bowel resections are mentioned as follows:
•Small bowel resection:
Certain common risks include accumulation of pus in the abdomen, internal bleeding within the intestine after surgery, diarrhea, infection of the incision area and the stitched area breaking open among others

•Large bowel resection:
In this case, tissues protruding through the cut causing an incisional hernia is the most common element of risk. Nearby organs may be damaged as well; scar tissue, problems with the passage of material within the colon among others are some of the other complications.
However, these issues occur rarely and resections are performed very successfully and quite regularly by surgeons.

You can watch a video of Laparoscopic Intestinal surgery by Dr Atul Mishra at our You tube Channel: