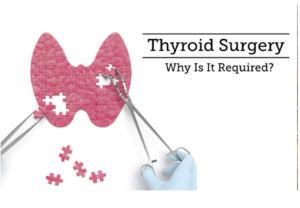 Thyroid is a small butterfly-shaped gland, which is present at the lower frontal region of the neck, right beneath the voice box. It produces hormones which regulate metabolism (the breakdown of food by the body to convert it into energy). It even plays a pivotal role in boosting organ functions as well as in helping the body to sustain heat.
However, too much of hormone production by the thyroid gland might yield structural problems, for instance, growth of nodules (abnormal tissue growth) or cysts (non-cancerous sac-like structures containing fluid) and swelling. Hence, thyroid surgery is a must once these problems occur. The surgery, administered with general anesthesia, eliminates the thyroid gland either wholly or partially.

Why do you need surgery?
1. The presence of tumors or nodules on one’s thyroid gland is one of the reasons why one should go for the surgery. Although most of the nodules are benign, few can be pre-cancerous or cancerous too. Also, those benign nodules can spell trouble, if they expand in size, thus obstructing the throat. They can be problematic as well if they cause the thyroid gland to overproduce hormones, giving rise to a condition known as hyperthyroidism.
2. Hyperthyroidism can be corrected through surgery. It is often an outcome of Grave’s disease, an autoimmune disorder wherein the body misidentifies the thyroid gland as a foreign body, thereby creating antibodies to combat it. The thyroid gland gets inflamed in the process, resulting in the overproduction of hormones.
3. Another reason is the enlargement or swelling up of the thyroid gland, termed as goitre. Similar to large nodules, goitre too can clog the throat, thus interfering with one’s breathing, speaking and eating.

There are two main approaches to thyroidectomy:
• Conventional thyroidectomy involves making an incision in the center of your neck to directly access your thyroid gland.
• Endoscopic thyroidectomy uses smaller incisions in the neck. Surgical instruments and a small video camera are inserted through the incisions. The camera guides your surgeon through the procedure.

You can watch a video of Endoscopic (Minimally invasive) Parathyroid Surgery done by Dr Atul mishra ay our You Tube Channel: